This version of the display is not available anymore.

A new version of this display is available.

The Pro-Race is a powerful but easy to use display that can be mounted on a wheel, dashboard or button box. It is also an USB joystick controller but this functionality can be disabled if needed. 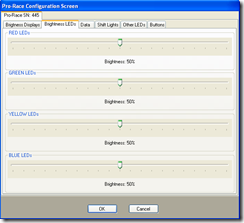 The brightness of the gear indicator display, 3 digits and 6 digits displays and LEDs can be adjusted independently. In particular each LED colour has a separate brightness setting. 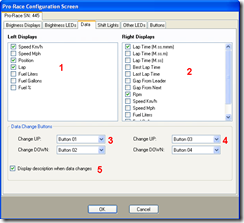 The Data configuration screen is used to configure what data is associated to the 3 digits and 6 digit displays.

If the checkbox indicated with 5 is enabled, when the displayed data  item is changed a small description of the new data is displayed, for few seconds. 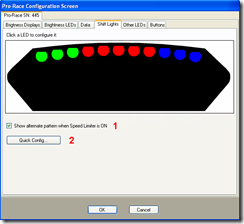 This section is used to configure the shift lights, the 11 LEDs at the top of the display.

Each LED can be configured to turn ON and optionally to blink at 3 different speeds based on the value of RPM. 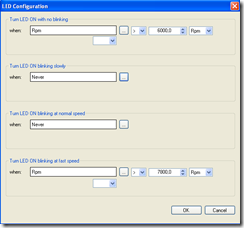 If the checkbox marked with 1 (two pictures above) is enabled, the shift lights will display an alternate pattern when the speed limiter is switched ON (only works with simulators that report the state of speed limiter). 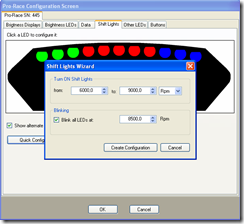 Button marked with 2 (three pictures above) opens the Quick Config wizard (picture above), that allows you to quickly configure all the shift lights in one go. All you have to do is to set the value of RPM at which the first and last shift light will turn ON and the software will calculate the appropriate values for the intermediate LEDs. 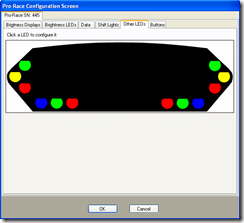 The other LEDs can be configured in the screen above. Like the shift lights, each LED can be configured clicking on it and the corresponding configuration screen will open. The configuration screen is very similar to the one for shift lights and the only difference is that more data can be associated to these LEDs, not only RPM but also fuel level, water temperature, flags and so on. 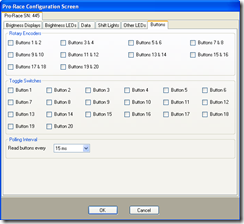 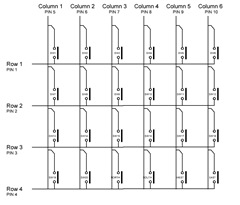 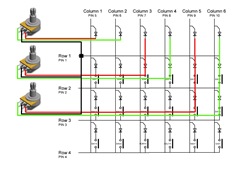 Rotary encoders are connected to the Pro-Race display similarly to the picture above:

When are diodes required?

Diodes are NOT required in any of the following cases:

In all the other cases, diodes must be connected between the pins of the rotary encoders/toggle switches/push buttons and the COLUMN pins of the Pro-Race display.

If you think connecting buttons and rotary encoders this way is too complicated, have a look at the button adapter.