Each LED is able to display an almost infinite number of colors. Different colors and blinking states can be configured for different value of engine RPM. 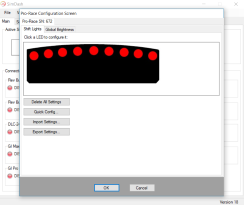 The Pro-Race Micro configuration screen is shown in the image above. From this screen it is possible to: 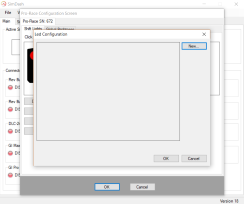 Click the LED you want to configure and the screen above will be displayed. At the beginning it will be empty because the LED doesn't contain any setting. Click the "New..." button to start the configuration. In the picture below the LED is being configured to switch on when the engine RPMis between 6000 and 7000 and the LED will blink fast when this happens. 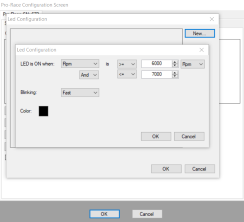 The last step of the configuration is to choose the color for the LED. Click the small color square and the dialog below will be shown: 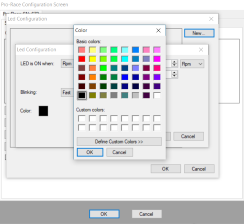 Note that the LED is not capable of representing all the colors that you see on the screen. In particular the very dark ones like grey are not displayed correctly. Some are only approximated, but most of them work well. 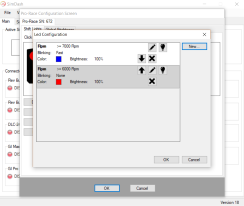 The picture above shows an LED that has been configured to:

So the conditions that determine the color of a LED are evaluated from TOP to BOTTOM and the first one that is satisfied sets the color of the LED and whether is blinking or not.

On the right hand side of each condition there are some buttons, that allow you to do this:

Use the Brightness slider to quickly adjust the brightness of all LEDs at the same time. There are 255 steps available. 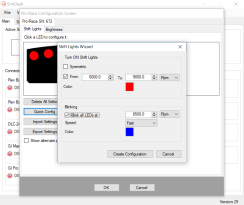 Use the Quick Config Wizard to quickly configure all the LEDs at the same time, rather than one at the time. The color of each individual LED can be fine tuned later if necessary.

The information that must specified in the wizard is:

The Leds can be configured to BLINK at a specific level of RPM. You can choose:

If the Symmetric option is selected, the LEDs will be configured to create a pattern from the sides of the display to the center, similarly to the image below:

If instead the option is unchecked, the pattern will be like this:

Importing and Exporting the settings

An optional 3D printed enclosure is available, with RED or BLACK front panel.

This an update of the popular but not available anymore Pro-Race display.The main characteristics of..