SimDash is the software we designed to configure and drive our boards. The SimDash installer will download any additional library if required (Microsoft .NET Framework). When SimDash starts, it will check if a newer version is available. If you have Windows Firewall enabled you could get a warning message for this.

If you receive an error when SimDash starts, download and install the Microsoft C++ Runtime for 32-bits and 64-bits systems. 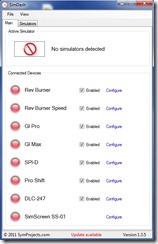 
With SimDash v.11 or later and the Pro-Gauge mounting v.2 of the firmware, it is possible  to connect this relay module to the Pro-Gauge, in order to switch the connected gauges ON and OFF, when SimDash is started and stopped.

SimDash 1.3.2 added new functionalities to the SPI-D display and a firmware upgrade is required. As usual, if SimDash gives you green light when the SPI-D is connected, it means the display is already running the latest firmware available.

There is an alternative firmware for the Pro Shift controller, which makes use of the eight buttons (four buttons with older versions of the Pro-Shift) that can be connected to the board. If you download and install the new firmware the Pro Shift, as well as the usual functions, will also be detected as a USB Game Controller with eight buttons, which can be configured in the simulator. The new firmware requires SimDash 1.3.5 or later. The original firmware will work with any version of SimDash.

Use the Bootloader to do the upgrade and follow these steps.


The Bootloader application is used to update the Rev Burner, SPI-D, Pro Shift, SimScreen and all the other boards'  firmware. Follow these steps to complete the operation.


This small application is used to configure the joystick controllers.